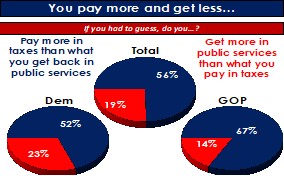 With proposals emerging from the Biden White House that would raise the estate and capital gains taxes on America’s family-owned businesses, we were commissioned to ask the American people where they stood.

We conducted a 1,000-respondent national survey to understand how Americans really feel about taxation of all kinds today. The results were quite surprising in that reactions to taxes in America is often surprisingly unified even though everything else in politics is hopelessly divided:

3) Taxes in America are too high. Regardless of political party, EVERYONE says taxes in America are too high. This includes a clear majority (62%) of Democrats and 78% of Republicans. Conversely, only 20% of Democrats and 6% of Republicans think taxes are too low. That gulf speaks for itself. Obviously, no one wants to pay more in taxes than they have to, but this does suggest wider degree of opposition to the Administration’s upcoming tax proposals and potential rejection of additional spending initiatives that will require higher taxes. (Note: The GOP takeover of the House in 1994 and 2010 were both triggered by voters angry with Democratic White House generated tax hikes.)

4) Multi-generation family businesses are overtaxed, not undertaxed. Just ask the public. Americans have tax sympathy for our family-owned businesses, with 50% of people believe these entities pay more than their fair share in taxes and only 14% believe they pay less than their fair share. This is particularly important in a post-pandemic economy where voter sympathy for family businesses is significant. Support for higher taxes on big corporations remains high – even among Republicans – but opposition to higher taxes on family businesses is just as strong and universal. 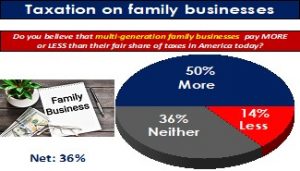 5) Americans don’t want to raise the estate and capital gains taxes to the levels proposed by the White House. While “tax the rich” rhetoric is common and has support across the political spectrum, raising the estate and capital gains taxes is rejected by the public. Just 27% of the public want to see these taxes increased – including a surprisingly low 38% among Democrats. Conversely, a near majority (48%) oppose this proposal. 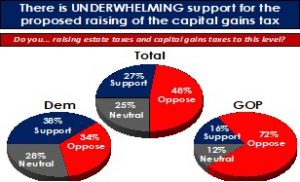 Have Your Voice Heard in Congress. Please Take Action Today!!!

Are you an FEUSA Member? If not, get in on the movement today!